“Growing up in conflict: the impact on children’s health and psychosocial wellbeing”

The Final report on the symposium “Growing up in conflict: the impact on children’s health and psychosocial wellbeing”, hosted by UNICEF in partnership with the Government of the Netherlands in The Hague on 26th and 27th May 2015, is now available. 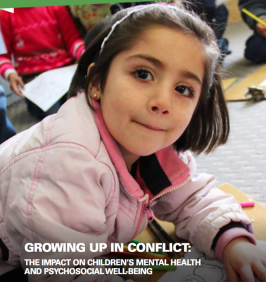 The Symposium on “Growing Up in Conflict” assembled experts on mental health and psychosocial support (MHPSS); practitioners, especially colleagues from agencies working in conflict-affected countries; academics; and representatives from United Nations agencies and non-governmental organizations to review the state of field in terms of knowledge and evidence, share insights on current field practice and programming, and make recommendations for advancing knowledge and practice.

The Symposium was hosted by UNICEF in partnership with the Government of the Netherlands in The Hague and supported by UNICEF’s Peacebuilding, Education and Advocacy programme, ‘Learning for Peace’, which implements innovative programming on education for peacebuilding in 14 countries around the world. The Symposium was intended to inform a range of initiatives such as No Lost Generation, which address the immediate and long-term consequences of the Syria crisis on a generation of children and youth.

The Symposium featured two days of panels and expert discussions, followed by a day for a core group of practitioners to share experiences in a planning workshop. This third day offered field colleagues from different agencies the chance to collaborate and learn from each other. The Symposium also provided an opportunity for advocacy. In particular, the concluding session of the second day brought together donor governments and practitioners from the field. The outputs of the Symposium will contribute to advocacy around the World Humanitarian Summit and post-2015 Development Agenda discussions.